What’s new at the California State Fair? Here’s everything you need to know

Originally published by SacBee.com and as the cover story of the print Sacramento Bee’s Ticket section on July 13, 2018 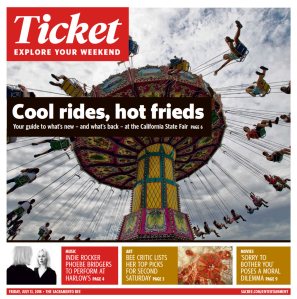 It’s time once again for the California State Fair.

That means thousands of kids running around and screaming with joy, mom and dad viewing the exhibits, plenty of deep-fried and oversized foods, thrilling rides and lots of sights and sounds for the entire family.

The fair runs from July 13 through July 29 and features several free and discounted days, limited-time attractions and quite a few brand-new experiences.

It can be quite overwhelming when planning a full day, so we’ve put together a guide to help.

For those who find the mid-July fair too hot to handle, organizers have added several “Cool Spots” throughout Cal Expo, which recently got a new acting police chief, where fairgoers can stop and cool down. In these locations, full-body misters squirt a cool mist of water from head to toe at the touch of a button. They even include charging stations for your phone and free Wi-Fi.

Speaking of phones, for those who are attached to theirs, the fair has added selfie spots throughout, where photogenic fairgoers can stop and snap a pic and post those grinning faces to social media for a chance to win a prize.

A new exhibition, “The Future of Good,” will examine “how we will grow and eat in the future to meet the needs of an expanding population,” according to information provided by fair organizers. The exhibit, featuring 50 images from 27 photographers, also highlights California’s role in food production on a global scale.

In addition, new at this year’s event is a “Silent Disco” at the Expo Center, where music lovers can don headphones and jam out to kid-friendly tunes provided by disc jockeys. DJ battles will take place in the evening.

If you’ve ever wondered what it’s like to live in a tiny house, you can tour about a half a dozen of them from 11 a.m. to 8 p.m. during the first weekend of the fair at the Miller Lite Racktrack Grandstand.

A life-size board game that educates players about agriculture, called “Life’s Big Ag-venture,” will be featured and aims to encourage interest in agricultural careers and ag support organizations.

The fair will newly feature a Navy Week, the ability to follow the fair on social media and earn a special beverage with a secret code, and a “Lady Bird” experience where fairgoers can buy a special ticket to get unlimited use of the Log Ride and watch a screening of the film.

Perhaps the most popular of the State Fair’s attractions — at least among kids and kids-at-heart — is the fair’s carnival area, which offers everything from spooky houses to the giant Ferris wheel.

This year, there are a few new rides to check out. According to the State Fair’s official ride guide, the one new ride in the Kids Park is called Puppy Love. The Main Carnival features four new rides — Mega Flip, Turbo, Cyclone and Wind Surfer.

The rides from Michael Jackson’s Neverland Ranch will be returning this year as well. Those include Balloon Samba, Bumper Cars and Dragon Wagon. For more information on rides, including carnival hours, pricing and restrictions, take a look at the official ride section of the State Fair website.

The State Fair’s concert series lineup was announced in March and you can see which artists will be taking the stage this summer below.

Concerts are free with admission to the fair, and seats are first-come, first-served. However, tickets can be purchased for reserved seating. For more information about the concert series, head over to the official State Fair concerts page.

New this year are Kids Bopp and ZZ Top concerts at Papa Murphy’s Park, which is the home of the Sacramento Republic FC and is located on the grounds of Cal Expo. Kids Bopp will play on July 16 and ZZ Top with George Thorogood and The Destroyers will rock out on Thursday, July 26. Keep in mind, these shows require a separate admission fee.

Of course, the fair wouldn’t be the fair without unique and – depending on whom you ask – delicious things to eat and drink. Fair organizers have provided The Bee with a list of new and unique edibles for this year’s event and some are shown below (vendor in parentheses).

If you’re looking to save a little green, there are several free days and discounts for this year’s State Fair.

On Mondays, there will be free admission until 3 p.m. for anyone who donates three canned or dried food items, which will be given to the Elk Grove Food Bank. On Tuesdays, kids under 12 are free and rides are just $2 for everyone. Wednesdays and Thursdays offer $2 food item sales by fair vendors from 11 a.m. to 4 p.m. On Fridays, attendees aged 62 or over will receive a $2 discount on admission.

Those who purchase a ticket to the Sacramento Republic FC match on Saturday, July 21 will also receive free fair admission for that night. Additionally, the Republic FC will host a “Kick On Goal” event at Papa Murphy’s Park from 1 to 4 p.m. on Tuesday, July 17 where a player from the team will sign autographs and take photos with fans from 2:30 to 3:30 p.m.

On Thursday, July 19, active duty military and veterans will be able to enter the fair for free. On Thursday, July 26, admission is free for first responders. Both of these free days are sponsored by BloodSource.

Several fan-favorite attractions, exhibits, competitions and more are returning this year. Some of those include the Best of California Brewfest, National Wiener Dog Races, cornhole competition, horse racing, local musicians and artists, photography and Steampunk competitions, olive oil tasting events and fireworks every Friday and Saturday at 10 p.m.

For more on admission pricing, dates and times and other details, visit the official State Fair website at castatefair.org.