Originally published by SacBee.com on Aug. 1, 2018

The Sacramento Kings and the American Red Cross have teamed up to help families and individuals affected by the devastating California wildfires.

Donations are being matched by the team 100 percent and all proceeds will go to wildfire relief, according to information posted on Facebook and tweeted Wednesday. 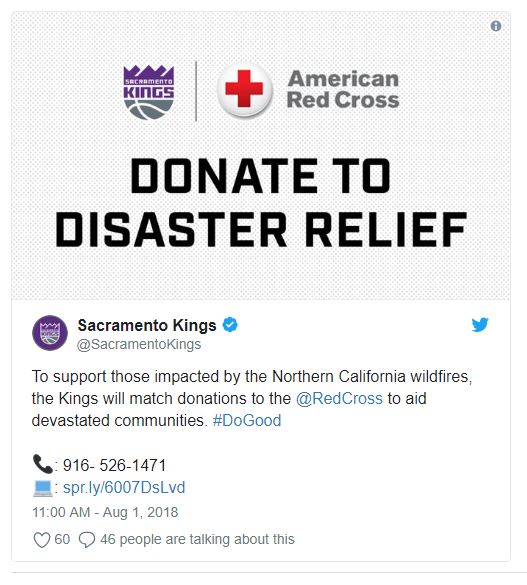 Donations are being accepted in amounts of $10, $50 or $100 via the team’s ticket purchasing portal. The donations can be purchased similarly to buying tickets, meaning the dollar amounts can be multiplied by selecting more “tickets” in the drop down menu.

Officials say donating money is the best way to help fire victims rather than sending items, because too much of the physical goods end up going unused and in landfills.

Update (Aug. 2): As of 11:59 p.m. Wednesday, the Kings have stopped matching donations, but are still accepting community contributions online. The team matched $15,000 in fan and community donations for a one-day total of $30,000.

This story was also published in the print edition of The Sacramento Bee in the local section on page 3B Aug. 2, 2018 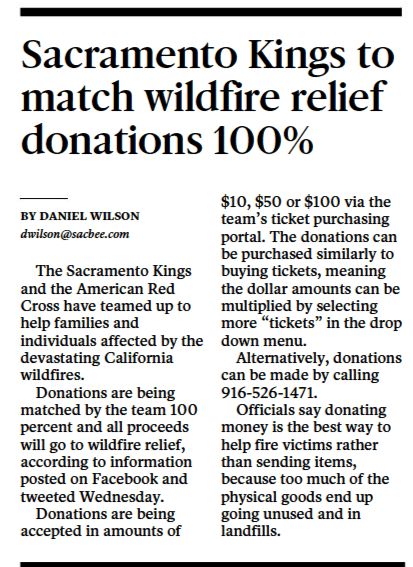