A Starbucks is coming to Yosemite National Park, but thousands want to stop it 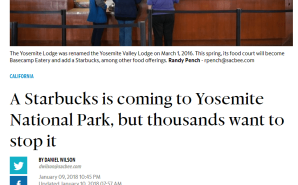 An online petition to stop a Starbucks from being added to Yosemite National Park is rapidly gaining steam, with thousands of people supporting efforts to stop the international coffee chain from entering the protected land.

The change.org petition has received over 12,000 signatures in nine days, according to an update on the petition page. The petition, which has a goal of 15,000 signatures, was close to its goal at 10:30 p.m. Tuesday, with more than 14,200 people signing it.

The petition was posted by a self-proclaimed “concerned citizen” and has been signed by people from all over the state.

“Multinational corporations have no place in our National Parks,” the petition’s description reads. “The opening of a Starbucks in Yosemite Valley opens the door to further undue development. The Park will lose its essence, making it hardly distinguishable from a chaotic and bustling commercial city.”

The Starbucks is part of a renovation project and will be located in the park’s food court at the Yosemite Valley Lodge, according to the park’s concessionaire, Yosemite Hospitality, a division of Aramark. The food court will be renamed Basecamp Eatery and has targeted spring for its opening.

Lisa Cesaro, marketing manager of Yosemite Hospitality, told The Fresno Bee she was aware of the petition, but said the Starbucks is still being added to the park. At the time of her comment, the petition had 3,500 signatures.

Starbucks has approximately 3,000 locations in California. In total, the company currently operates more than 24,000 stores throughout 70 countries, according to its official website. Yosemite National Park is visited by millions of people every year from all over the world.