Originally published in the Aug. 9, 2017 print edition of the West Sacramento News-Ledger 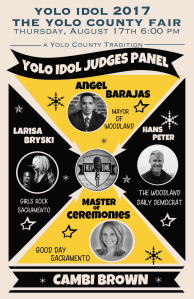 The California State Fair may be over for the year, but Yolo residents still have plenty of fun to look forward to when the County Fair returns to Woodland later this month.

The event will take place on Aug. 16 from 6-8 p.m. and tickets run $20 per person. They can be purchased at the Yolo County Fair office, which is located at 1125 East St. in Woodland.

“Every year, we make a point to be at the Yolo County Fair Gala showing what we grow on our farm in Capay,” said Thaddeus Barsotti, owner and farmer, Capay Organic. “It’s a great opportunity to talk with farmers and food producers and see the big picture of all the great products and crops coming from Yolo County.”

Tickets can also be purchased online at http://www.yolocountyfair.net/events/2017/2017-yolo-county-fair-gala. Gala coordinator Samantha Novan says the event sells out quickly each year and advises those interested to purchase their tickets as early as possible.

“We believe that the Yolo County Fair is the last agriculturally-based fair in the state and highlights the rich diversity of crops grown in a county that truly works to keep the agricultural presence strong, vibrant, and economically sustainable,” Stephen F. Heringer, owner of Heringer Estates Vineyards & Winery and longtime gala participant said in the press release. “Come to the Gala and Fair and appreciate a peek into the past, a flavorful taste of the present and our dreams for the future.”

In addition, this year’s fair will also feature the return of Hometown Heroes: Battle of the Bands and Yolo Idol, according to County Fair Entertainment Director Marty DeAnda.

Hometown Heroes is a contest that debuted at the fair in 2015 where local bands compete for cash prizes and fair goers can enjoy the show. The show takes place this year on Aug. 17 and will feature four bands that have been handpicked by event organizers for the competition.

The bands are The Big Poppies from Winters, The Marshall House Project from Woodland, Big Sticky Mess from Davis, and Caliscope from Woodland.

Bands have 15 minutes to perform. The performances start at 8:30 p.m. and judges will choose a winner based on fan participation, originality, appearance and musicianship.

The winning band receives $250 and will be allowed to participate in a paid performance at the 2018 County Fair and will receive an opening spot at a Sacramento venue. The runner up will receive $150 and will also be paid to perform at next year’s fair.

“Competition is getting tougher and the quality of the bands have gone through the roof,” said DeAnda in a press release. “What I’m seeing now are enthusiastic crowds of people coming to the fair to see the bands, rather than just seeing the bands because they happen to be at the Fair.”

Yolo Idol will take place before the Hometown Heroes band battle and will feature Good Day Sacramento’s Cambi Brown. From 6:30 to 8:30 p.m. on Aug. 17, participants of this karaoke event will be able to sing and play instruments in an attempt to make it to the top three.

Those three will then sing a second song for a chance to win the top prize of $250. Second and third place winners will receive $100 and $50, respectively, according to the press release for the event.

To reserve your spot in the Yolo Idol contest, contact Davis at (530) 383-2199. West Sacramento’s Cindy Tuttle will perform the National Anthem before the evening’s events.

Both the musically-filled night of Aug. 17 and the Gala preview on the 16th are just a taste of what’s in store for Fair-goers this year. The Yolo County Fair, which according
to its official website started in 1893 and incorporated in 1935, runs from Aug. 17 through 20 from noon to midnight each day. Fair entry is free.

For more information on what all the fair will offer this year, please contact the Fair Office by phone at (530) 402-2222 or by email at yolocountyfairgala@gmail.com. You may also check out the Fair’s website at http://www.yolocountyfair.net for updates, program information, and much more or you can join the Facebook event page to receive updates.