New building on schedule for completion

Originally published in the May 6, 2014 print edition of the Sac City Express 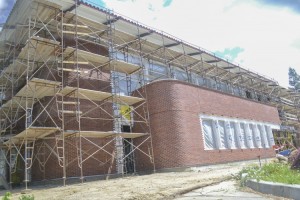 In June 2013, a vintage City College building, known to students as the Student Services and Administration of Justice building, was torn down and a construction project to create a new student services building began.

According to City College Vice President of Administrative Services Robert Martinelli, the new two-story building, which will include 16,000 square feet of usable space, doubles the space of the original building, and is on schedule to meet its February 2015 completion goal, partly thanks to California’s recent dry weather.

“To California’s chagrin, we’ve had a very dry winter, so [the construction crew] didn’t use many weather days at all during the course of the winter,” said Martinelli. “We’re still working on our plan to move into the building, but basically, it’ll be ready for summer of 2015 in terms of a semester.”

The new building will house Student Services on the first floor and the top floor will be the new home of the photography and journalism departments, according to Martinelli.

In addition to the new building’s construction, the Lusk building is also undergoing a construction phase, also due to be completed in 2015. Following that, a revision, which Martinelli says is currently in design, to Rodda Hall North will be the next project.

“Rodda Hall’s third floor currently houses photography and electronics,” said Martinelli. “So when journalism and photography go to the new building, electronics is going to Lusk 11. Then we’ll be able to get in and do the Rodda North project.”

The next projects on tap, according to Martinelli, are renovations of the Mohr Hall and Lillard Hall buildings. But Martinelli said these projects are held up because of a lack of funding.

“Those projects are dependent upon 50 percent, roughly, funding from the state,” said Martinelli. “Because of the budget crisis, the state hasn’t had a facility bond measure for several years. The next opportunity will be the fall of 2016.”

Martinelli said pending whether a measure for funding passes in 2016 or not, these projects would need to be reevaluated.

“What it would likely mean is we pull local money up to the Mohr project and fully fund that with local bond money,” said Martinelli. “That puts those later projects in kind of a precarious position. That’s the action point that we’re waiting on, the state bond and what is going to happen.”

The next phase of the project, following Mohr and Lillard’s facelifts, which are both scheduled regardless of where funding will come from, would be to expand the West Sacramento and Davis outreach centers, Martinelli said.

For now, the focus is on the new student services building. Vice President of Student Services Michael Poindexter said that before the building began construction, student, faculty and staff opinions were taken into consideration in an effort to make an easier, more streamlined process for new and existing City College students.

From this feedback, the college began looking at how to best combine the offices into a space that would make them more easily navigable.

“The building is being built based on information we received from students and pulling those pieces together to make sure that we have a welcoming front door for students that will be entering into the institution,” said Poindexter. “We’re really looking at the first floor of that building being the front door to the institution.”

Poindexter added that he feels the building’s design will cut down on student confusion and large crowds, especially during the first few weeks of the semesters and that overall, the new setup will provide better “customer service” to the students.

“I’m excited about it,” said Poindexter. “We’re going to have more of a welcoming feeling. We want a feeling as close as we can get, like a feeling when you walk into the Apple store. We’re going to have people available to talk with you as you enter into the building. There will be a reception area that students can stop in before getting into a line.”

Photography Professor Paul Estabrook got a chance to take an inside tour of the new building recently and said he’s excited to move into the new space soon.

Estabrook said in terms of construction, the best part is the openness of the building.

“The building is just great,” said Estabrook. “One thing across the board that people are going to be really excited about, it has a completely different feel than any other building on campus because when you walk in the front door, you can look up into photo journalism and [see examples of ] photography. Then on the second floor, you get this really unique perspective of the first floor, plus the campus because that whole front area is just glass.”

Estabrook shared Poindexter’s sentiments that the new building will be welcoming for students.

“It’s very warm, very inviting,” said Estabrook. “It seems like it’s going to be busting with activity. I wish it was done, ya know? I think journalism especially is looking forward to this because they’ve been in a temporary [building]. They’ve been camping out behind the baseball field for way too many years now.”

Additional reporting by Will Ownbey.