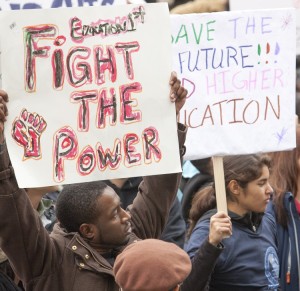 The annual March in March rally for higher education took the message of affordability “from the classroom to the Capitol” on March 3 as City College students joined others from several California community colleges on the south steps, despite the rainy and cold weather conditions.

The rally took place from 11 a.m. to noon and featured several speakers, including Assembly members, community college students and professors. Approximately 300 students showed up at the Capitol, chanting slogans like “no cuts, no fees—education must be free,” and “students united—we will never be divided.”

Student Senate President for California Community Colleges Aaron Bielenberg, who is a mathematics major at Mendocino Community College, pointed out that even when it began to rain around 11:30, students continued to show their support.

“Now it’s raining, and you know how many students I saw leaving?” Bielenberg said to the assembled crowd. “None. In fact, you all put up some umbrellas like it was a drill. It was quite something to see.”

Bielenberg, who explained he arrived at the Capitol just 30 minutes after completing a midterm, said that he understands the sacrifices that everyone made to be there.

“I’m going to go ahead and make a really rough estimate that for every one of you there’s a group about this size in the community college system,” Bielenberg said to cheers from the crowd. “It’s sometimes sorry to see that the voice of the community college system is the voice of those who are left over, a voice shadowed by the educational system, hardly using its mic.”

Bielenberg reiterated a message that most other speakers at the rally had stated—the stigma that those who attend community colleges are less privileged or incapable of attending university-level classes.

“The march is important because the students are concerned that funding has been cut,” said Sandeep Singh, president of the City College Student Senate. “Although there is no big thing to fight about like Prop. 30 or AB 955, we still need to rally together and show the Legislature that we are still here. We voted for them.”

Along with Singh and other SAC members, Paul Kuang, acting president of the Clubs and Events Board, was out in the City College Quad at 8 a.m. to rally students to join the march.

Kuang said that one of the major issues is keeping textbooks affordable by providing low-cost or free online access to common textbooks.

“[Students] want the textbooks online, but most of the publishers don’t want that because they want the fees from books,” said Kuang.

Students from other Los Rios colleges also participated in the march. A student and director of legislative affairs for student government at Cosumnes River College, Malcolm Nash, said that he wanted to be a part of the march to support affordable textbooks, among other reasons.

“The march is important because students are important,” Nash said. “I would like [the state] to regulate publishers and not let publishers publish too soon, and then the books are outdated.”

Angel Jimenez, March in March committee co-chair and the rally’s master of ceremonies, said that despite the fact that community colleges are not currently facing major cuts, it’s still important to address ongoing issues.